SYDNEY ALLEN-ASH is a strategist, writer, and podcaster. Her practice is grounded in deep research and interdisciplinary collaboration. She likes working upstream, at the beginning of new initiatives, and is adept at steering major projects with many stakeholders from idea to execution.

Born outside of Toronto, Sydney studied Fashion Communication at Ryerson University. She joined Virtue, Vice Media Group’s creative agency, in 2016 as a social strategist managing a major telecom client. She grew quickly into a cultural strategist role where she was tasked with helping brands authentically and sustainably engage with communities. In 2019, she relocated to Vice’s New York City headquarters, where she led an effort to define Vice’s values for the first time in its 30-year history, redesigned the company’s onboarding protocols, led the development of Vice Media Group's first company website, and oversaw the development of an internal app designed to keep their global workforce connected to one another, to management, and to the work they produced together.

Since leaving Vice in 2021, Sydney has focused on projects that leverage her experience in transforming organizational dynamics while also providing opportunities for her to pursue subjects of special interest. In her writing and podcasting, she dives deep into the interstitial zones bridging athletics, race, history, equity, art, and popular culture. Sydney’s interest in podcasting developed out of her experience as a host and moderator—a role she’s taken on time and again in her career, moderating panel discussions, helming interactive workshops, conducting live artist interviews, and even hosting a short documentary produced for On Running. 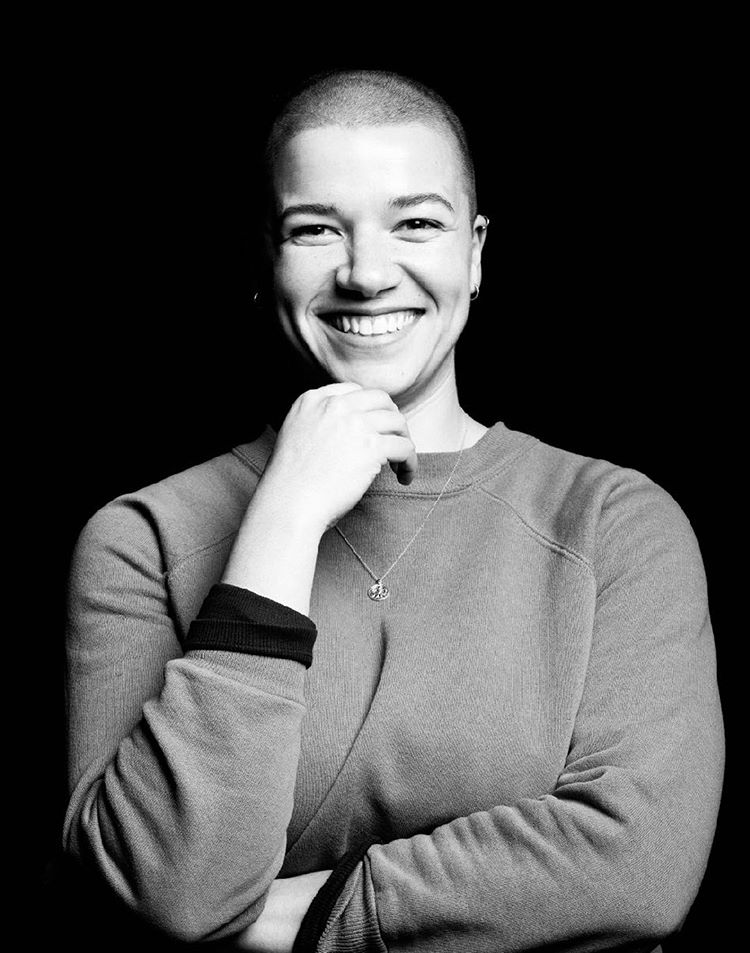 Presently, Sydney edits Early, a magazine about the culture of labour published by HR consultancy Bright + Early, writes and produces Toenails, a podcast about running, history, and the future of sporting culture supported by Ciele, and teaches a course in Design Thinking at Toronto’s George Brown College.

I hosted a short documentary with On Running as part of the campaign to launch the Cloudflyer 4 shoe. The documentary showcased my perspective on running and sport through a variety of interviews with runners all located in and around the town of Hope in British Columbia, Canada.

Stills from Run Beyond

Toenails is a podcast about running and also not about running. When I was approached by long-time collaborators at Ciele Athletics to work on a new creative project I pitched the idea for this podcast. Toenails was created as an avenue for well-researched, intellectual stories about running that immerse the sport into culture, politics, and history.

In the past, I had created and hosted multiple interview-based podcasts so with Toenails I wanted to challenge myself to produce a narrative podcast from end to end. The result is a 6-episode season (culminating in early 2023) that was conceptualized, researched, written, recorded, edited, and mixed by me with support from Sam Reiss, Daniella Baretto, and Nick Yim.

The Internal Hub is an app made for VICE Media Group (VMG) employees designed to increase connectivity, awareness, and alignment amongst the staff in ways that were previously impossible.

While working as Senior Manager of Global Internal Communications (IC) at VMG I conceptualized the Internal Hub as part of an IC strategy to streamline and modernize the employee experience of roughly 3000 staff who worked in 30+ countries on several different brands and businesses. However, when COVID began, the Hub evolved, in the eyes of the corporate and executive team, as an indispensable tool for connection and communication.

The hub has many custom features that I specifically identified as solutions to problems that VMG staff faced. The Announcements Banner on the left-hand side of the Hub’s home screen was made for quick and easy global communication, allowing us to rely less on time-intensive, inbox-overloading emails. The Content Ticker running across the bottom of the Hub shows a constantly updating stream of editorial work across all brands, businesses, and geographies. Each item on the ticker linked out to its respective platform, allowing staff easy access to and awareness of their coworkers’ work. The Screening Room was a secure streaming library where we uploaded new video content from VMG teams that were pay-walled or geo-blocked. This finally allowed VMG staff—whose primary medium has always been video—to easily view each other’s work. The Shortcut Bar on the top right included preset shortcuts to important “always-on” external resources like the DEI Dashboard and also allowed users to add their own personalized shortcuts. The Global Calendar on the right-hand side centralized all company-wide events with clickable zoom links. The Employee Directory is integrated with the HCM software Workday to provide an easily searchable database of all staff. The Podcast Player allowed for easy uploading of the internal podcast we made for staff.

I brought in my long-time creative partner, 56, for the design and development of the Hub. Through the compatibility of our teamwork, I was able to fluidly switch from corporate quarterback to creative strategist, to project manager, to fledgling UX researcher throughout the project’s 10-month timeline. My responsibilities included wrangling the teams, access, and data feeds necessary to create the Hub’s multiple API-enabled features, managing communication of the project’s progress with the many internal stakeholders across the Communications, HR, IT, Editorial, Executive, and Marketing teams, and scrutinizing every aspect of the Hub’s design and functionality through countless rounds of feedback and user testing.

Early is a work magazine for real life. It is published online and supported by HR consultancy Bright + Early. I was hired by the founder of Bright + Early, Nora Jenkins Townson, to conceptualize and launch an editorial offshoot of the consultancy that would publish progressive and provocative thought leadership.

Throughout the 5-month lead-up to launch I created the brand strategy, naming, copywriting, creative direction, and editorial strategy, as well as operating as co-editor by commissioning and editing stories. To bring Early to life I commissioned designer Sam Jayne to come up with a foundational visual identity and managed an internal web designer from B+E for the website design and development.

The vision for Early Magazine was informed by my own experience working in and alongside HR teams that are trying to do the difficult work to improve workplace culture and employee experience. I felt, and still often feel, that the media around work culture relies far too often on publishing bold think-pieces that don’t reflect the messy, tedious, nuanced reality. Since launching I now continue to operate as co-editor of the magazine commissioning and editing stories, managing publishing, and making artwork for the magazine.

LibraryLab was an experimental philanthropic venture created with Enough Creative and launched with the founding partnership of global luxury property developer Westbank. I was hired to lead the project from a strategic perspective. I created the brand strategy, naming, tagline, and all additional copywriting in the project. I also managed marketing strategy, the graphic designer, the web team, and the social media manager who brought the project’s vision to life.

LibraryLab existed to drive meaningful community investment and storytelling in support of its shared mission with Westbank to build more beautiful and equitable cities. This brand positioning was informed by countless hours of research about urban planning, placemaking, and the relationships we form with each other and the places we live in.

With this as our vision, we developed an innovative philanthropic program that awarded substantial grants to three emerging filmmakers in Toronto. The open-ended prompt to the filmmakers was for them to tell a meaningful human story about the relationship between people and place.

With the support of LibraryLab grants three emerging filmmakers were able to create made beautiful films that showcase unique stories about Torontonians and their connections to the city. The rights to the films are completely owned by the filmmakers and some have since gone on to show in internationally recognized film festivals.

BetterDone was a full-day conference created by VICE Canada’s Diversity & Inclusion Committee. In addition to hosting the conference, I was head of the D&I Committee and worked with the other committee members to conceptualize and produce the conference which brought in 12 speakers, 9 hours of consecutive programming, and 50 attendees from 10 youth organizations across Toronto. Speakers included production studio Kid. Studio, casting agent Nafisa Kaptownwala, editor Romany Williams, animator Gyimah Gariba, filmmaker Jasmin Mozaffari and more.

The brand identity for the conference was inspired by the phrase "Done is better than perfect.” While this is relevant advice at all stages of one’s career, we felt it was especially important at the beginning when young people are trying to figure out what they like to do and how they like to do it. We centered all talks and panels on this theme in an effort to give the young attendees focused advice for the moment they were in. All visuals were created by Marvin Lau who was also a member of the D&I Committee.

In 2016 I began shooting the Wild Bruce Chase team throughout their various FKT (fastest known time) attempts over the years. In each attempt the team varied in size, but the premise remained the same. The group would complete a multi-day continuous relay race from one end of a trail to the other end of that trail in the fastest known time. This meant running through the day and night through long swaths of unmaintained trails across Ontario, sleeping in vans, and eating lots of granola bars.

I worked with longstanding womenswear boutique Ewanika throughout 2016 redesigning the shop's website, bringing the store online, and shooting editorial and e-commerce photography.

This photo series was conceptualized with designer and fellow runner Nanna Munecke and shot by me in 2016. It was intended to showcase bodies and movement in a way that diverged from traditional sport media.

The Goods was an editorial series that I photographed and wrote for the prolific menswear boutique Nomad in Toronto. The series, launched in 2015, focused on profiling interesting men around the city, many of whom have gone on to gain increasing international attention. The series featured musician Daniel Caesar, artist Moya Garrison-Msingwana, producer Jordan Evans, artist Trevor Wheatley and more.

Work/Place - Exploring the futures of where and how we work.

Re:Search - Interviews on a wide range of themes.

In Talks with Es Devlin | HXOUSE